Going back in history as far as Roman times, lead mining was the most important mineral industry in the White Peak area of the Peak District.  During the 18th century, at least 10,000 miners worked in over 30,000 workings, some of which were opencast and some deeper mines.

Magpie Mine is the best preserved lead mine in the Peak District.  It is thought to be over 300 years old and is rumored to be haunted by an old miner who is guarding a particularly valuable seam of lead ore.

The disused mine can be easily accessed via a public footpath from the village of Sheldon.  We sometimes incorporate a visit to the mine on a full day scenic guided walk from Ashford in the Water, also visiting Monsal Head and Monsal Dale.

There are two pump house chimneys at Magpie Mine.  The square one is of local Derbyshire design and the round one is of Cornish tin mine design.  They stand above 200 metre deep shafts which were worked more or less continuously for over 200 years.  The last attempts to mine the valuable lead ore is marked by black winding gear and a rusting, corrugated iron shed dating from the 1950’s.  It is now protected as an ancient monument and used as a field study centre by the Peak District Mines Historical Society.  There is an interesting information plaque on a building near the main shaft.

Before leaving the mine, it’s worth visiting the re-constructed horse gin about 150 metres to the east of the main mine buildings.  The horse would have been walked in circles to winch up containers of lead ore from the mine below.

Further information about our guided walks in the Peak District. 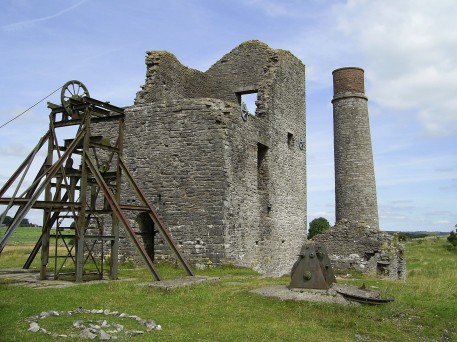 One thought on “A Walk to Magpie Mine”

This site uses Akismet to reduce spam. Learn how your comment data is processed.